Plan for the Expedition here. Not an OAUSA sanctioned event.
Post Reply
27 posts

We will not rely on any CB, GMRS or FRS frequencies for communications.

I believe that each of the members here are bringing an HT and these frequencies should be programmed into your handheld as well as your mobile.

Charlie has posted information on repeaters in the areas we will be traveling and for those who can load this information, it will be valuable.

Last time I was In Canyon de Chelly, I recall that there was a moderate amount of repeater traffic that I found with the aid of the scan button. Having actual repeaters programmed into the radio will be useful.

Some of the areas we will be visiting, will have cell phone coverage. For the remaining areas, our ability to communicate will be 2m/440 repeaters or simplex, satellite internet connection, HF Airmail, or sat phone.

Chazz, with that bright, new, shiny, FT350, I guess you will be running APRS??

Anyone bringing HF equipment and if so, what?
DaveK
K6DTK

Yup, I'm finishing up the install of the 350 tomorrow. I'll also be running APRS on my VX-8R while we are on foot.
Chazz Layne—dotcom
Top 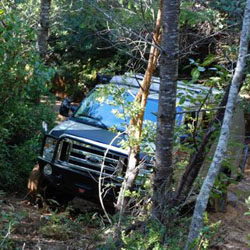 DaveK wrote:Anyone bringing HF equipment and if so, what?


The Roof Butte repeater looks like it offers the best coverage for the areas we will travel. It's on a 9800 ft. peak and has a very good view of CDC, Red Rock Valley and Monument Valley.

The Window Rock Repeater seems to be blocked by the Defiance Plateau, but it may be worth a try.

The Holbrook Repeater is located close to Highway 40 and it may be a perfect repeater for the long ride on the freeway.


Charlie, depending on where you will be, we can use either the Holbrook or the Roof Butte Repeater to meet up with you.

Has anyone checked any other repeaters to see what their coverage is?
DaveK
K6DTK

I looked at my arrl software and found these repeaters that might be of use:

They appear to be in the general area.
Top

Just a quick reminder for all those running APRS -

You can send a regular email to anyone (Ham or not) with your radio and other Hams can send you messages through services like Open APRS.

If you plan on using these services, you might want to sign up for Open APRS and practice with it a little and also practice sending emails to your self.
DaveK
K6DTK

Extremism in the defense of liberty is no vice.
Moderation in the pursuit of justice is no virtue.
Top
Post Reply
27 posts