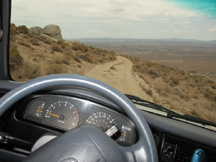 I agree that the warning-shot idea was a bad idea -- we told him so later when he confessed almost did this. It kind of fell into the "this is bad, quick let's make it worse!" category.

I agree on fires. I'm a nut about fire prevention, carry a big fire extinguisher and take other measures (and even started getting permits on the lakebed after that!).

But weirdly enough even the fire crew (not ranger as I think I first said-- they had just responded to a critically injured biker out there) that reminded us of the permit situation joked about fires and dry lake beds being the least of their worries. They even gave us a permit on the spot and said it was just formality. Over the years officials we saw out there repeatedly told us that they were far more worried about motorcycles and drinking, because they carry more bikers away in stretchers than anybody.

I once had to call in an airlift for critically wounded biker out there once after he and a buddy, both drinking, collided full-speed on the lakebed.

This lakebed has a history, and sadly was the very same one where we just lost all those spectators on the CA 200 tragedy.
John, WA4DQS
My rig: Five speeds, four wheels, three radios, two seats, one nut.
Top
Post Reply
11 posts