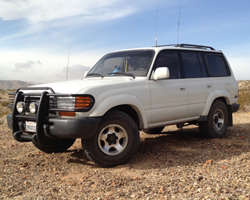 Well this section hasn't had any traffic lately so I guess I had better recount my tail of rolling my 4Runner onto it's roof back on the 13th of Aug.

My son, Travis, and I had gone with some friends to see the Memorial for the CA 200 off-road race where 8 people had been killed last year at this time. I was at the race and had seen the carnage first hand and had taken several photos that ended up getting published in several different forms of media. I wanted to go and get some photos of the new memorial that was to be dedicated to the 8 people that had died, and the 12 people that had been sevearly injured.
We went and did that, then headed up the 247 to Johnson Valley to the actual crash site off Bessemer Mine Rd. On the way there it started raining off to the right side of the road so we all decided to head down a dirt road to go see the rain and to check were some lightning had struck and started some grass fires. We turned onto Lucerne Valley Cutoff, a very flat, long, straight, graded dirt road and headed towards the rain. As we were driving along water started coming down the road towards us. Just a little at first then gradually it was across the whole road. It wasn't that deep, just a couple of inches at the most. All of the sudden my 4Runner hydro-planed turned left with out any input from me headed into the graded embankment on the left side of the road, the front left tire stuck into the embankment, spun the truck around and the momentum carried us over onto the roof. As we are going over Travis and I are just staring at each other (he was in the front passenger seat in his car seat) and kinda yelling "ahhhhhhhhh" until everything finally stopped. We are both now hanging upside down in out seats staring at each other. I asked him if he was fine, he said "yes daddy". He asked me if I was fine and I said "yup I'm good". Then over the radio I hear my friend call to me to see if we were OK. I replied that we were fine and just hanging around. I turned off the ignition, the lights and made sure everything was shut down. My friend Brett came running over and finally got Travis' door open, I released his seat belt and Brett caught him in mid air before he ever touch anything and pulled him out and put him in his truck. I forgot to mention that it was raining the whole time and lots more water was coming down the road at us. I had to release my seat belt, land on my head, and crawl out the back door on my back. At this point I got the recovery strap out of the back of my truck, we hooked it to Brett's truck (a 2009 Dodge 2500 4x4 diesel Megacab) and flipped upright. I never thought about getting pics of it upside down, but did get them after we got it on its wheels. Brett says we need to take it back there and get the pics of it upside down. LOL
We tried to start it but the distibutor cap was crushed by the hood as the hood ended up on top of the embankment. We towed it up the the intersection of Hwy 247 and Hwy 18 where we were able to get ahold of a friend that lives in Apple Valley and loned us his flat bed to bring it home. Once home I replaced the cap, filled the fluids and drove it off the trailer and into the driveway.

The truck body is a total loss. I'm trying to figure out what to do at this point. I have several options but not sure which to pursue. Buy another truck with a bad motor and switch with my good one. Or I have a donor truck that is 2wd, gutted, no motor or tranny, and missing the back half of the roof. The previous owner was going to make a Glamis toy out of it. I bought it for the $1200 4" ProComp suspension lift on it for $450. I was going to be switching the lift between the two trucks the following week. I am thinking about trading bodies from one to the other or trading motor tranny and front differential to the donor truck. Any comments, thoughts or suggestions would be appreciated.

I ended up with a sprained neck and shoulders from bouncing my head off the roof as we went over and Travis had just a slight seat belt rub on his neck/shoulder. Other than that we are just fine and Travis loves to tell the tale of our big adventure rolling daddy's Toyota 4Runner. Sorry about the truck but so glad to hear everyone made it out OK.
Top

I am glad you made it out with minor injuries.
DaveK
K6DTK

Dave, glad that everyone made it out OK...

don't look at it as a "total", look at it as an "upgrade opportunity"
Light travels faster than sound. This is why some people appear really bright, until they start talking

Oh man, sorry about your truck but glad you guys are okay.

I never would have thought about the risk of hydroplaning in that situation either. You think about that stuff on pavement but not on dirt.
-John Graham
1989 YJ & 2000 TJ

Glad everyone is ok. The roll would scare me as much once I knew my son was ok. Calling to tell his much what happened, even though he was ok, would frighten the living cr@p out of me though.

I don't know if that donor vehicle is any better off than your wrecked vehicle.

Bummer. Very very glad you and your son are okay. This experience will make you stronger and it's a story you and him will share around the fire and to the grave.

Is it just the month for rolling on flat roads or what? We just did the same thing (minus the water) to the Ranger.