Plan for the Expedition here. Not an OAUSA sanctioned run.
Post Reply
3 posts • Page 1 of 1

Our trip this year will be a two week expedition involving (hopefully) a combination of two past trips with the introduction of one new area. I will be updating this post with pictures and trip details in the weeks to come. If you are interested, it would be a good idea to check back to get additional information.

Last year we spent nearly two weeks in the Grand Staircase Escalante, but owing to the fact that the GSE is a great deal larger than I anticipated, we were only able to see about half of what we had planned. So, we will spend the first several days exploring the western half of the GSE. We even have a request or two to camp at lake level at Powell, although one night at Alstrom Point wouldn’t be all that bad.

East of the GSE, in the south eastern corner of Utah, is an area called Dark Canyon. DC is primarily administered by the US Forest Service and the Bureau of Land Management. To complicate matters, a small portion of DC is within the Glen Canyon National Recreation Area and is administered by the National Park Service. A true maze of jurisdictional rules and regulations! DC, for our purposes, will include some of the immediately adjacent areas as well. In general, the topography ranges in character from desert-like, rocky canyons in the west, near the river - elevation around 4,000 feet - to forested valleys containing natural arches and Anasazi ruins in the east, where elevations rise up to over 8,000 feet. While a great deal of the area is devoted to wilderness, there are many roads that traverse the canyon and surrounding plateaus, giving spectacular views of the area’s scenery and geology. As you would expect, there are no services or facilities. Most camping is dispersed, although there appears to be a few primitive campgrounds.

As many parts of Utah were used at one time for mining and cattle grazing, so too was Dark Canyon. The remnants of these operations are still in place today. Long before these uses, the canyon was home to Puebloan Indians and their ruins have been preserved for those willing to do a little hiking. The plateaus above the canyon offer spectacular views and some excellent camping opportunities.

One of the more appealing aspects of Dark Canyon is its relative obscurity. It is not, per se, a national park or monument, not a state park, or even a regional park. In fairness, however, part of DC falls within the boundaries of the Manti-La Sal National Forrest. Getting information on the area requires an extra effort, but from all accounts, it will be well worth it. As much of the area is designated as a wilderness, it lends itself well to hiking. While we will not be doing a great deal of foot exploration, there are a number of interesting sights that are near the roads that will warrant some exploration.

While it may be a bit ambitious, the last few days of the trip will include a visit to Kelly Point, in the Parashant. Since considerably more research is required and since I have not worked up a good itinerary, this leg of the trip may be dropped in favor of spending more time in the first two areas. The last time we visited KP was in April and the weather was about as perfect as it gets. The road to KP is long and rocky but the views of the Grand Canyon, at the point, are as good as it gets. One word of caution - the trail is narrow and the brush is thick. If memory serves, Bob (diverbob) scratched the entire clear coat off his Hummer last time we went and there were about a dozen stops necessary in order to clear the trail. Again, time permitting, we will spend a couple of days on the point exploring some of the sights and points of interest.

Information on the GSE and the Parashant is available from our previous trip reports and introductory posts. Even though I will be posting some of that information below, greater details are available here:


From my preliminary reports, it looks like trip planning will be a little uncertain regarding when it will be best to travel. The high elevation portions of DC (8000 feet or thereabouts) may have a late spring, and if snowed in, may be closed. So, as a result, it is difficult now to give precise dates, but we will work with my suggestions, below.

Tentatively, the trip will be from April 23, 2012 to May 7, 2012. A second alternative would be April 27 through May 12. More research and some input from the rangers will help.

An exact route and itinerary has not been set at this point but I will be posting that info soon. This will be a vehicle based trip, but there will be some hiking to the more interesting places. We will limit the trip to a group of about 7 vehicles. The issue we ran into last year was a rule imposed by the park service which limited the number of people in any group. Because almost all (or all) of the camping was dispersed, the other issue we ran into was the challenge of finding camping spots that were large enough to accommodate our group. Depending on our head and vehicle count, we may be able to adjust these numbers slightly.


INFORMATION AND PICTURES OF THESE AREAS

The GSE is one of the most visually intriguing wilderness areas in the US. We discovered just that last year. The diversity of environments and geology was spectacular.


The Grand Staircase-Escalante National Monument's vast and austere landscape embraces a spectacular array of scientific and historic resources. This high, rugged, and remote region, where bold plateaus and multi-hued cliffs run for distances that defy human perspective, was the last place in the continental United States to be mapped.
Even today, this unspoiled natural area remains a frontier, a quality that greatly enhances the Monument's value for scientific study. The Monument has a long and dignified human history: it is a place where one can see how nature shapes human endeavors in the American West, where distance and aridity have pitted against our dreams and courage.
Grand Staircase-Escalante National Monument spans nearly 1.9 million acres of America's public lands. From its spectacular Grand Staircase of cliffs and terraces, across the rugged Kaiparowits Plateau, to the wonders of the Escalante River Canyons, the Monument's size, resources, and remote character provide extraordinary opportunities for geologists, paleontologists, archeologists, historians, and biologists in scientific research, education, and exploration.

Grand Staircase-Escalante National Monument covers 1.9 million acres of public lands in southern Utah, with over 900 miles of routes available for vehicle travel. Off-highway vehicles (OHVs) are restricted to certain designated roads in the Monument. Dirt roads in the Monument range from moderately rough to challenging.

I have listed several publications and maps below which have been very helpful in getting information on the GSE. Although they are not complete, they are an excellent start and I would recommend them if you are interested in attending. All are available on line through Amazon.

Grand Canyon Parashant's natural splendor provides a sense of solitude to those who venture into its isolated domain. Located on the edge of one of the most beautiful places on earth, the Grand Canyon, the Monument's expansive landscape encompasses a chronicle of natural and cultural history.

Camping and hiking in the Monument is an adventure with over a million acres to explore. Only primitive camping is available.


A bit more history, from the BLM ( http://www.nps.gov/archive/para/history.html ):


The story of this land is rich and long. Two billion years of geologic history and more than 11,000 years of human history have shaped the land and its people, resulting in natural splendor and a sense of solitude in an area that remains remote and unspoiled.

The monument is a geological treasure. The sedimentary rock layers of the Paleozoic and Mesozoic times (600 million – 66 million years ago) are relatively undeformed and unobscured by vegetation. Layers of rock formations have been exposed by the eroding Colorado River, providing a clear view of the geologic history of the Colorado Plateau and testifying to the power of geological forces. The prominent cliffs of two major faults sever the Colorado Plateau. The Grand Wash Cliffs and the Hurricane Cliffs slicing north to south through the region continue to be major topographic barriers to travel across the area. The Grand Wash Cliffs also form a spectacular boundary between the tortured, tilted lands of the Basin and Range province and the horizontal layers of the Colorado Plateau province.

At the south end of the Shivwits Plateau, several tributaries of the Colorado River have carved spectacular Parashant, Andrus and Whitmore Canyons. Volcanic rocks and an array of cinder cones and basalt flows are evidence of more recent (9 million to 1,000 years ago) volcanic events that shaped this land. During this time lava flowed into the Grand Canyon at the Whitmore and Toroweap areas and dammed the river many times during the past several million years.

Archeological evidence indicates that humans have inhabited or used this area for more than 11,000 years. Because of the remoteness, sites have experienced little vandalism and provide valuable clues about the earliest human activity of the hunter-gatherers and puebloan ancestors. Since cultural artifacts are the best clues to ancient habitations, please leave artifacts as you find them. The Southern Paiute who lived in the area at the time of Euro-American contact continue to maintain their ties to this land.

Explorers crossed the area beginning with the Escalante-Dominguez expedition in 1776. Later Jedediah Smith, Antonio Armijo and John C. Fremont explored portions of this land. Explorations by John Wesley Powell and Clarence Dutton in the 1870’s provided stirring written descriptions of the geology, flora and fauna of the area.

This rugged land was settled by people who cherished it and fought to save the remoteness that drew them here. Ranch structures, corrals, fences, water tanks and ruins of sawmills are scattered across the monument and help to piece together the stories of the remote family ranches and lifestyles of a people that value freedom and individuality. Today the descendants of those early settlers continue to ranch in this area.

Information and maps are available from the following sources: The United States Congress designated the Dark Canyon Wilderness in 1984 . Great stone arches, old-growth ponderosa pine, aspen groves, meadows, hanging gardens and high country deserts are found at Dark Canyon. The only designated Wilderness in southeastern Utah, the 47,116-acre Dark Canyon Wilderness is located in a beautiful and remote section of the Colorado Plateau. Visitors are dwarfed by steep, sculpted and terraced sandstone walls that shade the canyon in morning and late afternoon -- hence the name. Ancestral Puebloan structures and rock art are tucked among the cliffs. 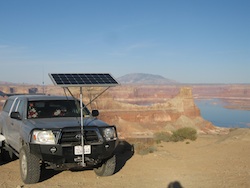 Michael
Time to stop talking about it and just go do it!
Top

Awesome looking trip! I'll have to wait for the next one when I have two weeks paid vacation available.
-John Graham
1989 YJ & 2000 TJ

View all my trip reports here at my blog: GrahamCrackers
Top
Post Reply
3 posts • Page 1 of 1