Plan for the Expedition here. Not an OAUSA sanctioned run
Post Reply
3 posts • Page 1 of 1

Our trip this year will focus on Dark Canyon (south eastern Utah) and the Parashant (or Arizona Strip). Due to some unusual and unfortunate circumstances last year, we were not able to complete our trip to Dark Canyon. Although we have visited the Parashant previously, there are always new things to see and favorites we need to visit again. Trip length will be about 14 days, leaving on Friday, April 26, 2013, and returning on May 4, 2013. An exact itinerary has not been set at this point, but generally, we will spend the first week in Dark Canyon and the second week in the Parashant. To the extent possible, we will keep the dates a little flexible so as to avoid particularly bad weather. I will be posting an itinerary shortly.

One of the more appealing aspects of Dark Canyon is its relative obscurity. It is not, per se, a national park or monument, not a state park, or even a regional park. In fairness, however, part of DC falls within the boundaries of the Manti-La Sal National Forrest. Getting information on the area requires an extra effort, but well worth it. As much of the area is designated as a wilderness, it lends itself well to hiking.

DC is located north of the Navajo Nation, but is not a part of it. Many hundreds of years ago, the land which is now called Dark Canyon, was inhabited by the same Puebloan Indians as in the Navajo Nation. Much of the topography of DC is similar to Navajo land and that means that many ruins are still present (some of which we have discovered). Unlike our previous trip to the Navajo Nation, a guide is not necessary to visit these sites. Although the actual sites are not advertised, with some good research, a little bit of luck and a willingness to do some hiking, they can be found. At least for the ruins we discovered last year, their condition was exceptional, as the pictures below demonstrate.

The plateaus above the canyon offer spectacular views and some excellent camping opportunities. In general, the topography of DC ranges in character from desert-like, rocky canyons in the west, near the river - elevation around 4,000 feet - to forested valleys containing natural arches and Anasazi ruins in the east, where elevations rise up to more than 8,000 feet. While a great deal of the area is devoted to wilderness, there are many roads that traverse the canyon and surrounding plateaus, giving spectacular views of the area’s scenery and geology. As you would expect, there are no services or facilities. Most camping is dispersed, although there appears to be a few primitive campgrounds.

As an added bonus, we will travel up the Moki Dugway to get to Dark Canyon. It is a very steep, narrow, scenic and unpaved road that ascends more than 1000 feet in a very short distance. At the Natural Bridges National Monument Visitor Center, there is a brief description of the Moki Dugway as follows:


The Moki Dugway is located on Utah Route 261 just north of Mexican Hat, UT. It was constructed in 1958 by Texas Zinc, a mining company, to transport uranium ore from the "Happy Jack" mine in Fry Canyon, UT. to the processing mill in Mexican Hat. The three miles of unpaved, but well graded, switchbacks descend 1100 feet from the top of Cedar Mesa. The State of Utah recommends that only vehicles less than 28 feet in length and 10,000 pounds in weight attempt to negotiate this steep (10% grade), narrow and winding road.

The term "mokee (or Moki)" is derived from the Spanish word moqui, which was a general term used by the 18th century Spanish explorers and settlers in this region to describe the Pueblo Indians they encountered and the vanished culture which had left behind the numerous ruins they discovered during their travels. This term continued to be used by the Anglo pioneers, who moved into southern Utah during the 1800's, and their descendants.

A few general words of caution: With elevations reaching slightly above 8000 feet, expect the temps at night to be very cold. Based on past experience in both DC and the Parashant, expect severe brush scratches. I think that Bob lost most of his clear coat on the trail to Kelly Point.

The following description from the USFS is a good overview of Dark Canyon (http://www.fs.usda.gov/attmain/mantilasal/specialplaces):


The United States Congress designated the Dark Canyon Wilderness in 1984 . Great stone arches, old-growth ponderosa pine, aspen groves, meadows, hanging gardens and high country deserts are found at Dark Canyon. The only designated Wilderness in southeastern Utah, the 47,116-acre Dark Canyon Wilderness is located in a beautiful and remote section of the Colorado Plateau. Visitors are dwarfed by steep, sculpted and terraced sandstone walls that shade the canyon in morning and late afternoon -- hence the name. Ancestral Puebloan structures and rock art are tucked among the cliffs.

The Parashant (which is on the North Rim of the Grand Canyon) contains some of the most spectacular scenery in the world. This year’s trip will be a blend of a few places that we need to see again and a few new places that need to be explored.

Briefly, we will revisit Kelly Point and Twin Point. Although somewhat out of character for the type of trip we usually do, I felt that it was worth deviating from our usual wilderness camping style to go for one day of “paid-for” lodging and prepared meals. If you have traveled to or are familiar with the North Rim of the Grand Canyon, you have probably come across the Bar 10 Ranch. The Bar 10 offers this description of the ranch:


"Remote" describes it best. The Bar 10 Ranch is located nine miles from the north rim of the Grand Canyon, in the heart of the Parashant National Monument, on the fabled Arizona Strip, one of the most remote areas of the western United States. The ranch is 80 miles of dirt road from the nearest town which is St. George, Utah.

We will be spending one night at the Ranch in their famous Conestoga Wagons and get to have both dinner and breakfast served up at the ranch dining room. For the ambitious amongst us, there will also be a hike to the bottom of the Grand Canyon following the overnight stay at the ranch.

We will also be visiting a few new places, including White Pocket on the Paria Plateau (near Vermilion Cliffs).

The following description from the National Park Service is a good overview of the Parashant (http://www.nps.gov/para/ ):


Grand Canyon Parashant's natural splendor provides a sense of solitude to those who venture into its isolated domain. Located on the edge of one of the most beautiful places on earth, the Grand Canyon, the Monument's expansive landscape encompasses a chronicle of natural and cultural history. Camping and hiking in the Monument is an adventure with over a million acres to explore. Only primitive camping is available.

An exact route and itinerary have not been set at this point but I will be posting that info soon. I will also post sign-up information soon as well. This will be a vehicle-based trip, but there will be some hiking to the more interesting places. We will limit the trip to a group of about 7 vehicles. The issue we ran into last year was a rule imposed by the park service which limited the number of people in any group. The other issue that we need to deal with is the challenge of finding camping spots, especially in remote areas, that are large enough to accommodate our group. Depending on our head and vehicle count, we may be able to adjust these numbers slightly.

Information on Dark Canyon and the Parashant is available from our previous trip reports and introductory posts. Details are available here: 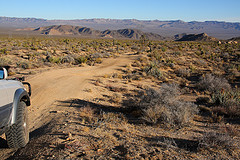 Re: Dark Canyon and Parashant 2013

Re: Dark Canyon and Parashant 2013

Looks like I'm going to miss out on another fantastic trip - no way I can take off 14 days in a row; I'm happy if I can get 14 days off in a year

Have a great time !!!
Light travels faster than sound. This is why some people appear really bright, until they start talking