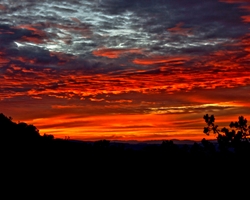 If you haven't spent much time in the desert or in remote areas like this you probably don't have a sense of the kind of person places like the Mojave draws. It takes a certain type of person but it also makes these rugged and hearty people a real hoot to be around. This trip was no different. Our hosts were great and the relationship that K6DTK has forged allowed the group to ride on those shirt tails to a successful and insightful tour of places and sites many will never have the opportunity to experience. This was another lesson in simply listening to the stories that are told around camp that may lead you to your next adventure and this trip was no exception. On to the photos taken at the Kokoweef complex.

Disclaimer: A lot of the areas where this series of photos were taken is PRIVATE PROPERTY and you are subject to being scrutinized and in many cases, kicked off site if you show up uninvited. Practice the usual "tread lightly" standards and most of the time a simple smile and willingness to make new friends can make all the difference in the world with respect to "access." 16. The book that contributed to Steve's travels in the Mojave that ultimately brought him to Kokoweef where he continues to research the mysteries that surround the Kokoweef tale.
161111, Kokoweef 640 16.jpg (105.99 KiB) Viewed 3022 times 19. Long before Earl Dorr started spinning his accounts, there were tales from the Spanish and well before that the verbal history of the Native Americans.
161111, Kokoweef 640 19.jpg (90.88 KiB) Viewed 3022 times I also had a great time, met some new friends. Mines, food, and company were amazing!

Here are a couple of my photos. Your pictures are FANTASTIC!!! Well my photography game is off but here is my contribution. https://goo.gl/photos/K1SfRpX8Jmu1BsAT6 Dave, thanks for organizing an outstanding trip. Steve was an excellent host and I am indebted to him for taking a day off to show use the amazing operation.