S.E. CUPP: Passage of Bill on Guns In National Parks

S.E. CUPP: Passage of Bill on Guns In National Parks


By S.E. Cupp
Conservative Commentator/Author, “Why You’re Wrong About the Right”

The left is up in arms – pun intended. President Obama is set to sign into law a bill that would allow visitors to carry loaded and concealed weapons into our national parks.

The suggestions that legalizing concealed weapons in national parks will mean increased park violence, death to Smokey the Bear or a rush on machine guns is just sloppy research and a lazy interpretation of what, exactly, this bill will mean for gun owners.

The arguments against this legislation are numerous and varied. But not surprisingly, most stem from the kind of hysterics and inaccurate caricature that the left has made a killing on.

Columnist Gail Collins of The New York Times, for example, muses that gun owners can now hold up souvenir stands at Yellowstone “in order to bring home a much-anticipated geyser refrigerator magnet.” While everyone knows that violence is hilarious, it seems a bit paranoid to think the Johnson family is going to whack a cashier in the middle of their family vacation.

In Politico’s Arena, where I am admittedly a contributor, Northeastern University journalism professor Alan Schroeder writes, “Americans everywhere can breath [sic] a sigh of relief.” Gun owners can now “purchase assault weapons to obliterate the pesky predators that stalk our national parks.”

Similarly, Victor Kamber wrote, “The gun lobby has Smokey the Bear in its sights.”

What they fail to understand, however, is that this gun provision has nothing to do with hunting. Or purchasing assault weapons. And the suggestions that legalizing concealed weapons in national parks will mean increased park violence, death to Smokey the Bear or a rush on machine guns is just sloppy research and a lazy interpretation of what, exactly, this bill will mean for gun owners. Of course it’s also an attempt to caricature gun owners as crazy-eyed nutjobs who’d take aim at a box of puppies if it crossed their field of vision, but that’s become standard operating procedure.

As a gun owner myself –- I have a 12 gauge shotgun –- I think it’s important to correct the misperceptions about this bill. After all, allowing the imaginations of the anti-gun movement to run wild doesn’t serve anyone’s best interest.

First, what the bill doesn’t do. It doesn’t make hunting in national parks legal, so everyone can stop worrying that Gomer and Bubba are going to single-handedly deplete the bighorn sheep population in Yosemite. Hunting in most national parks is already prohibited, but not by law. Individual park superintendents determine hunting regulations, so those who’ve banned hunting in their parks will likely keep it that way.

It also doesn’t mean we can expect more violence at the Grand Canyon. The expansion of Right-to-Carry has historically had an overwhelmingly positive and vitiating effect on violence. As the number of Right-to-Carry states has increased – there are now 40 – the nation’s murder and violent crime rates have decreased.

And it doesn’t mean we should prepare for a rush on assault weapons. The bill doesn’t have anything to do with buying guns, nor does it make it easier to buy guns. In fact, as we’ve witnessed recently, the fear that the Obama administration will tighten gun restrictions has resulted in the rush. Relaxing the laws will likely mean less desperation to start stockpiling.

Now for what it does do. First, it corrects a significant restriction on 2nd Amendment rights, which shouldn’t apply everywhere except in our national parks. — The idea that I can protect myself from predators in suburban Florida but not in the wilderness is absurd.

Furthermore, it provides some much-needed uniformity to federal land restrictions, which are made unnecessarily complicated by patchwork regulations and conflicting bureaucratic rules. The Bureau of Land Management and Forest Service, for example, allows the carrying of firearms, but the National Park Service and U.S. Fish and Wildlife Service do not.

The bill also acknowledges the need for practical and sound economics. During a time when our national parks are suffering from lack of revenue and a decrease in tourism, doesn’t it make sense to levy one less restriction on visitors? The bill would allow the Jones family, traveling cross-country in their RV –- a gun on board for protection –- to drive through the national park instead of 300 miles around it. They pay a park entrance fee, spend a couple bucks on park merchandise, save a hundred dollars on gas, and tell their neighbors how great Zion was when they get home. That’s a win-win.

It will also allow the hunter, on private land on the edge of the national park, to stalk his kill past the gates without getting arrested for unlawful possession.

And it will allow a couple hikers to legally defend themselves in the wild –- against the crazy escaped convict or the charging grizzly.

All that said, what is admittedly problematic about the provision is that it was tacked on by Tom Coburn (R – Oklahoma) to a credit card bill that is overwhelmingly popular. This has prompted suspicion and frustration from a number of weary Democrats who feel hamstrung to vote for the bill, if only to get the new credit card rules passed.The Senate approved it 90 to 5, and the House approved it today by a vote of 361-64.

So concerns that Republicans have become a little sneaky in dealing with the Democratic majority may be justified. The disconnect between our flawed credit system and carrying a concealed weapon into a national park is perplexing and not unnoticed. But the left would be wise to stick to this line of attack, if they must, and avoid the emotional histrionics about gun control and violence that rely on cheap stereotype and unjustifiable inaccuracies – because as any good hunter knows, the best shot is the sure shot.

Under present regulations, the right to carry concealed now exists in the national parks, but only with a CCW. It will be interesting to see how or if this new provision ends up. Keep us updated. Thanks!
DaveK
K6DTK

Interesting article. Just wanted to clarify I was posting it and was not the author. Take care. 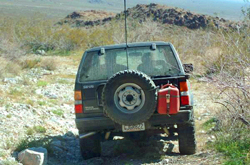 This is good. Every time i go out by myself, i worry about having a ranger have me explain the loaded 44 mag in the holster taped to the passenger side of the center console. This would prompt me to get something smaller and lighter to carry in a holster for those adventures that take me away from the truck.
'90 Pathfinder
'99 Expedition
Top

This is good stuff. As DaveK stated, it will be interesting to see if a CCW will be required or not.
"OLLIE"
(K6JYB)

Larry and I seem to be experiencing a sudden and unexplainable urge to travel to national parks.
DaveK
K6DTK

Extremism in the defense of liberty is no vice.
Moderation in the pursuit of justice is no virtue.
Top
Post Reply
7 posts • Page 1 of 1