Topics that have been discussed in the past and closed to further posts are placed in this forum to keep the main forum current and relevant.
Locked
36 posts

I won't have HF yet, but if the location ends up being in the Mojave or Big Bear I'd be happy to watch, learn, and cook...
Chazz Layne—dotcom
Top

Great to see you again.

The wind turbine is completely installed and ready to go. All we need now is some wind and we can talk forever. So if Larry and I show up, problem solved!

I like the idea of a remote location, very far away from the city. While it would be nice to rack up some points, this could be a great chance for everyone to see HF in operation and test their rigs out at the same time. Points could be the icing on the cake.

Hey Dave, good to read that your Green energy plan is implemented. I agree, it would be great to see this come together. You guys put a high emphasis on Amateur Radio here.....I'm surprised it's not an annual event for your group.
As much as this is supposed to be an EmComm sim....It really just turns into the biggest, craziest contest of the year. It's impossible to avoid the competitive thing with this...."give an American a stick and a ball" .....etc, etc...
Another thing I'll mention is http://www.n3fjp.com (and no, I'm not affiliated), this guy has the best/easiest logging software for Field Day. It's very fast and easy to learn. My dad's club (OCARC/W6ZE) used it last last year and they ended fourth in the country. Someone may want to hook the club up on this early as it has to be registered.
You guys are also going to need to think deeply about location. Things like: trees vs. push-up poles for stringing wires, or how to get the wires into the trees. The verticals will need tons o' radials and space to spread them....and, you'll want verticals if no beams are going up. Wires are nice, but verticals shoot lower and further if properly installed. Google "S9 Antennas" they have some DXpedition class vert's and radial plates that are cheap and work well.
Power?......nuf sed!
Also, divy'ing up the bands into minimally 3 person teams with "Band Captains". It's a good idea, but not a necessity, to have two operators running at a time at each station, both with phones on.....especially when pulling out the weaker stations. One can call... one can log. Phones and foot pedals help HUGE! For a single operator it's nearly mandatory.
Last edited by xtatik on Tue Feb 23, 2010 8:28 pm, edited 1 time in total.
Randy
K6ARW
Top

I've used n3fjp software in the past and i STRONGLY recommend we use it.

from what i've gathered. the higher elevation group camps site in big bear have lots of really large trees that i think will work out perfect for wires on the low bands. I'd really like to get on 80 and 160. I've never used "band captains" can you elaborate on this concept?

The group i usually work field day with usually had two ops to a radio one logging and one operating the rig. it usually work out really well that way.

as far as the band pass filters, i've never used them. the bands typically die down at night quite a bit so we've usually just moved to 40 & 80 on one radio and the rest hunting out the higher bands or maybe playing with the ISS and 6M. depending on how we have things set up i could definitely see the need for the filters.

Big Bear has been mentioned a few times already and i think it'll be a good choice. i know it'll be warm but it will be so much worse this time of year in so many other places. Anza is out of the question. and think the Mojave will be burning up. I think a big group camp site with lots of trees in big bear will do the trick. I've done some research on them we'll have to pay to use them but from what i can tell there are a few that could work out well. I'd like to visit them in person before making reservations and pulling the trigger on this.
The Juniper Springs Group Campsite is at about 8000 ft., Deer GC is at about 7500 ft, buttercup at 7000 ft, boulder GC at 7500 ft, bluff mesa is at 7600.

Has anyone here stayed at any of these group campsites in Big Bear before?
Nissan 4x4 Parts / Lowrance Off Road GPS & Off Road GPS Maps
909-547-4651
Top 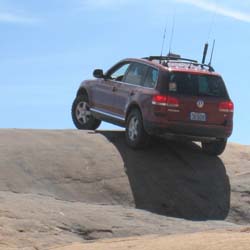 I am interested. I am an Extra, with presently a Kenwood TS-480 mobile HF setup.

Being in Las Vegas, the Mojave would be an easier drive... but hey, it is *HOT*. Bear is cooler.

I was with a few other Hams a couple years ago and we thought the Coon Creek Cabin area would be a killer Field Day site. Super High, full exposure over Palm Springs area to the east, might be challenging to the west. Heart Bar Campground is nearby. Perhaps not use the cabin, but there is plenty of room in that location. 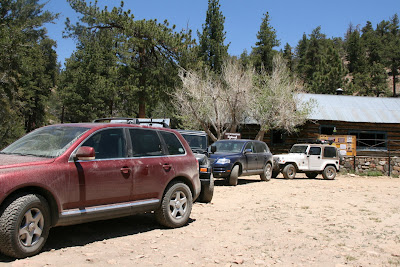 Coon Creek Cabin when I visited with some Ham / Offroad friends 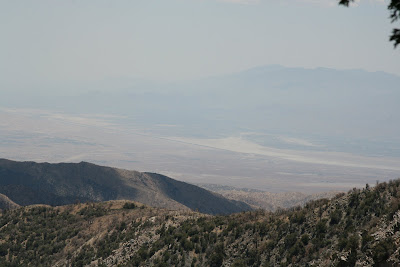 Remember, many parts of the East Mojave are 6000+ elevation and the temps won"t be as bad as the lower elevations. In June, unless you plan on being near the beach, the temps are going to be higher just about anywhere you go.
DaveK
K6DTK

Having a clear take-off angle for signals is important as well. Not having any peaks above 20 degrees from the horizon would be best. Being down in a valley or worse, a canyon...would not be ideal.
Randy
K6ARW
Top

I think Coon Creek Cabin is a GREAT Spot.I haven't been there but going by the pictures I've found and the elevation nearing 8200ft. i think it takes the cake. the Cabin seems cool too.
Why not use the cabin? I think it's nearly perfect. I noticed that there is a hill on one side of the cabin. do we know what direction this hill is in relation to the cabin?

The only thing that would perform better as far as radio goes is if we were tent'n it on the tip top of a mountain. but this is pretty close and there is shelter. My vote goes to coon creek.

Does anyone know what the USFS wants per night at this place?
EDIT: As i have it on paper from the Discovery Center in BB, They want $70/ Night. I think we'll need 2 nights there. We can show up early Friday and set up all day. and kick back friday night. wake up and operate from Sat morning - sunday morning. then tear down sunday. 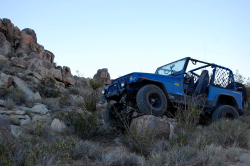 I have been a Tech for several months now and I have a 2m rig in my Jeep. I doubt I would be much help but I would love to come up and get in the way/ learn something.
KJ6COB
Top

Thats perfectly Fine! sounds like we'll have a few radios set up out there and plenty to learn from.
After talking to Dave, Sounds like we might also be turning this into a wheeling event. This is coming together really well.
If you have equipment to contribute to use for the event then it'd be greatly appreciated but there is nothing required other than an interest in radio and willingness to learn.
Nissan 4x4 Parts / Lowrance Off Road GPS & Off Road GPS Maps
909-547-4651
Top

Im alwayse down to wheel. Holcomb creek 3N93 should be open in May.
KJ6COB
Top
Locked
36 posts