Well since we had such a large group signed up for this run we split it into two runs. My group would leave the pavement at Vallecito Wash from highway S2. From there it was onto Arroyo Seco del Diablo (Spanish for "Devil's Dry Wash"), down Diablo Drop Off into Fish Creek and through Split Mountain. Heading east past the gypsum quarry along the rail road tracks took us through BLM land and around the Fish Creek Mountains, past Plaster City and onto Painted Gorge Road, just off Evan Hewes Highway (S80). Ollie's group ran that route in the opposite direction.

Airing down at the trail head.

The name "Vallecito," which means "Little Valley," dates from Spanish times. The salt grass "ciénega" made the valley the goal of travelers to California from Sonora in the early years of California, as it held the first good water in any quantity to be found on the west side of the forbidding Colorado Desert.

During the Gold Rush period immigrants in large numbers stopped to refresh themselves and their animals after what was called "The Journey of Death" across the Imperial Valley. The road through this valley was the great southern immigrant trail via the only wagon road into Southern California.

Here in the midst of the Carrizo Badlands, we find ourselves on part of an ancient alluvial fan from the ancestral Colorado River, which emptied into the Gulf of California as a delta outlet. Arroyo Seco del Diablo has cut through the hardened sandstone concretions carried downstream from afar to create the deep-sided canyon this trail follows today.

The loose and fragile walls of the canyon mean that rock and sand falls are common. Flooding through these areas compounds the problem for vehicles trying to make their way through.

You can see how the water cut a trench through the trail.

Once out of the trench I ran into some very deep and sticky mud. Forward movement came to a halt.

Its tunegoon to the rescue!

Strapped up. It took several tries for us to get through this section.

Here's the raw video footage I have of tunegoon attempting and then finally making it through. Afterward, he was on standby for recovery duty in case anyone else couldn't make it.

Here's the rest of the group making it through.

We encountered a few more washed out areas but nothing as bad as the first big one we ran into. What was great about this run was that we got to see conditions in the desert here that are not all that common.

Middle section of Diablo Drop Off.

Group shot just below Diablo Drop Off, on our way out to Fish Creek.

We ran into a bit of a traffic jam. Ten trucks ahead of us and several Jeeps waiting to head in around us. 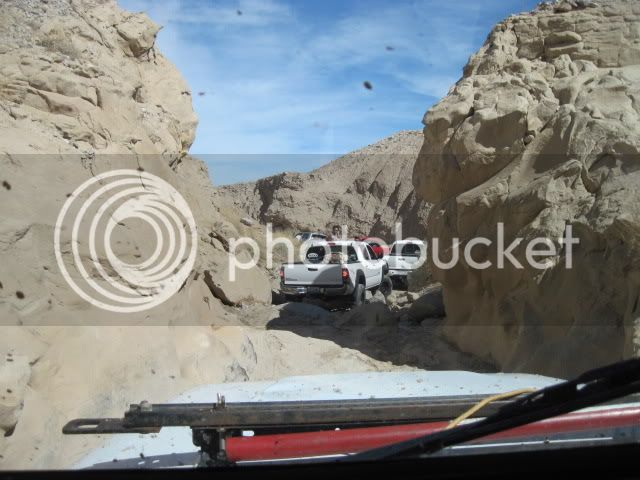 This was nicknamed Broken Shaft Gulch. Here we are coming through one of the rockier areas.

Here is where tunegoon (sorry I only remember his screen name) got into trouble.

Thankfully no one got hurt. After righting the vehicle and cleaning up the mess we were on our way again.

Meeting up with the other group for a moment.

Parked at the summit. Barely enough room for 11 rigs.

On our way down. It was getting late!

We had to wait here for a bit while two other Jeeps on the trail repaired a flat tire. They then followed us out.

From here it was a short drive out to the highway to hit the gas station and then about 40 miles back to camp. I had a great time leading this run and hope everyone else had a blast, even with the flop!
-John Graham
1989 YJ & 2000 TJ

Sorry for the delay in this post. I was tied up getting my mom sent back home and getting back to work. I have only been able to pop in and out of the forum periodically since this weekend.

I want to start off by saying thanks to everyone that came on my run. It was a fun run and the company made it all that much better. I think we could have spent the entire day on Carrizo Mountain just taking pictures. The geology there is amazing. I love the area and try to make it out there several times during its open season.

Truthfully, that run we did could probably be broken up into 3 or 4 days just taking pictures and exploring. Maybe next year we’ll condense it a bit and try a more focused run into one of the areas or several runs that allow us to take you to the areas to explore them more thoroughly. I think the highlights of the run included Larry getting stuck in the mud and getting the group split up for a little bit after it get dark. All things considered, everything turned out great in the end.