Well, I checked with the Rangers office again today and the news is the same - no campfires and no charcoal fires. Apparently, there is no snow in the area of our campsite and there has been very little rain. So, fire restrictions are in full swing. This means that we are only allowed to use liquid fuel stoves which, in the words of the Ranger, have an on/off switch.
DaveK
K6DTK 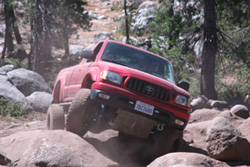 I wonder if the lid to a Sterno can counts as an on/off switch? 8)

I also have a small butane burner that will work with the fondue pot. I hope everyone likes cheese fondue. That is what I'm planning for the dinner. We'll also have a green salad and a fruit salad for dessert.
Bruce Berger
KD6GCO
'72 Pinzgauer 710M 2.6i
'91 Honda ST1100 197,000miles and counting

Two places we will visit on the trip - Crystal Cave and the Buck Rock Fire Look Out Station.

1. Crystal Cave is in Kings Canyon National Park. More information here: http://www.visitsequoia.com/crystal-cave.aspx . Note that this website (for the Cave), has not been updated as it states that the Cave is closed. I have confirmed that it is open. The tour is about an hour and there is a one-quarter mile hike to the cave entrance. We'll purchase the tickets at the visitor center on the way to the cave. The NPS says this about the Cave:


Crystal Cave has 3 miles of passages, making it the second longest cave in the two parks. More than 2,000 feet of passage and three new entrances were found in the early 1990s. The cave is a complex, "anastomotic" maze and is heavily decorated with many varieties of speleothems including rarely formed "shields" and "raft cones". The cave has suffered heavy vandalism through its commercialization. Crystal has at least four unique species of invertebrates including spiders and aquatic isopods living in the cave stream. 2. Buck Rock Fire Lookout Station is in Sequoia National Forest. The Buck Rock Tower was nearly abandoned and closed permanently until the Buck Rock Foundation stepped up in 2000 and restored the facility and brought it up to fully functioning status. It is now staffed 7 days a week during fire season. The Foundations website can be found here: http://www.buckrock.org/aboutbrl.html. The Foundation description of the Tower:


Located in the Sequoia National Forest, Buck Rock Lookout sits perched atop a granite dome and offers a breathtaking view of the Great Western Divide and other spectacular high mountain peaks of the Sierra Nevada Mountains. Access to the top is via a series of stair flights (consisting of 172 steps) suspended from the side of the rock. The current lookout building was constructed in 1923 and is historically significant as a representation of the earliest 4-A style live-in cabs of which there are only three in existence in the world today. There is a Costco fuel stop in Visalia, and three in the Fresno area (north side). Visalia is $3.23 and Fresno is $3.19. I will probably fill up in Visalia. Its cheaper than basin.
Tim
KG6WFV

Dave, what time will you leave to get to Sanger by 9? TopoUSA puts travel time from Fontana at about 4.25 hours to Visalia on the 5/99. I may get a headstart on Wed evening to get out of LA, if I can.
Tim
KG6WFV

taugust wrote:Dave, what time will you leave to get to Sanger by 9? TopoUSA puts travel time from Fontana at about 4.25 hours to Visalia on the 5/99. I may get a headstart on Wed evening to get out of LA, if I can.

Mapquest says it takes 4 hours, so I will allow 5 hours. Be sure and log in the Fresno repeater and our simplex into your radios. In town, of course, cell phones should work.

In order to save some time, it will be helpful if everyone can have their gas cans and water cans full as you leave home.
DaveK
K6DTK

Extremism in the defense of liberty is no vice.
Moderation in the pursuit of justice is no virtue.
Top
Post Reply
37 posts