I attended the Overland Expo West last weekend in Flagstaff, Arizona. I'll be updating the post over the weekend as time allows with pictures and comments on the event.

In the meantime, here are links to some YouTube videos that give a good overview of the event -

Note: A certain Pinzgauer that did not win the Cool Ride Contest appears briefly in some of the videos

I had to throw this one in. It's a tour of the Search and Rescue Pinzgauer that won the Cool Ride Contest. I camped next to Ben and his Pinzgauer at the Expo. He did a great job building up his rig for actual search and rescue missions for King County Washington. The camping area back in the tall pine trees was much nicer than at the previous Overland Expo venues although the far reaches of the camping area were about a 20 minute walk from the main show. There was a shuttle bus to take you around the venue grounds which came in very handy when bringing back gear purchased at the show. There will probably be more videos posted on YouTube on the Overland Expo this weekend. Check it out if you're interested.

I'm finally getting around to updating this post with some pictures from the Overland Expo.

There were 4 different off road courses set up on the infield of the horse track at the venue, One was to training classes, one for the BF Goodrich tire demonstrations, and another set up by Land Rover for new vehicle demonstrations and testing your own vehicle. Land Rover had another course where you could sign up to take a timed drive with a chance to win an off roading trip to Peru.

I had signed up for the large vehicle driving class even though the Pinzgauer hardly counts as a large vehicle. I was more interested in getting some tips driving large vehicles and to talk with owners to see where they actually use these large off road rigs. When I arrived there was an 8x8 Tatra waiting in line. I announced that the "dingy" for the Tatra had arrived when I drove up. There is connection between Tatras and Pinzgauer as the son of the engineer who designed the Tatra's drive train designed the drive train for the Pinzgauer. Tatras use a very similar swing axle suspension as Pinzgauers. The Tatra was keeping the Land Rover crew busy spotting and moving corse flags to keep them from being run over. One fun aspect of the Overland Expo is the opportunity to talk with owners of all kinds of overloading vehicles. I spent about an hour talking with the owner of this GXV. When asked about where he takes it he responded that there are many unpaved roads that such a large vehicle can navigate without trouble. He always checks with locals, rangers, and other public personnel before going into an unknown area. Obviously something this big can't go on many of the tight mining and mountain roads we are use to in the deserts and mountains of California but there are plenty of other places to explore.

This rig also had a sophisticated water filtration system. I was wondering how useful this is for domestic travel. The owner said that he uses it frequently as he and his wife go out for weeks at a time and its very convenient to park by a lake or stream and refill his water tanks with potable water. Of course this rig has a washer/dryer and a dish washer so he will use much more water than most.

Another cool feature of this vehicle is that it has garage/storage area in the back where the owner keeps a Yamaha TW200 motorcycle, spare tire, and other gear. There is a small crane to handle removing and stowing the motorcycle and spare tire. On a smaller scale, Earth Cruiser was there with the XP and FX models. Once again, I was able to talk at length with the owners of the Earth Cruiser FX. Although expensive, the owners are very happy with the unit and have only stayed a couple of times in public campgrounds. They mostly camp out on BLM land away from the crowds and the Earth Cruiser has everything they need for an extended stay dry camping. 4x4 Sprinters have become a popular platform for camper conversion. I didn't count but there must have been at least half a dozen companies showing converted Sprinter besides Sportsmobile. It will be interesting to see how this market does with the all new Sprinter design due in 2018 and all of the issues with small diesel engines in the U.S. Hopefully, Mercedes will continue to offer the factory 4x4 option regardless of what engines they use.

Adventure Trailers was there showing their new Habitat for full size trucks for the first time. The AT Habitat seems to be catching on as I saw more of them in the camping area than I did FlipPacs. Having a FlipPac I wasn't so sure about having it open to the back creating a longer foot print for the vehicle and camper but having an instant "awning" is nice. With even a slightly lifted truck there enough room for a 6 footer to comfortable walk underneath. Hopefully AT will eventually offer zip in walls to create additional closed in camping space. There was an interesting new camper called a LeenTu shown in a rough prototype level of development. This camper is worth watching for if anyone is interested in a more modern lightweight pop-up to fill the market space left vacant with the demise of FRP and their FlipPac. The cantilever roof addresses the torsion bar which is the Achilles heal of the FlipPac design. The lid opens up and back staying level as it's raised. There are top bows in front to form the tent area over the bed. Overland trailers are still very popular and many manufacturers were present at the show. Here is an interesting new one that caught my eye due to it's minimalist design and relative affordable price. I thought the shower option is interesting for such a small trailer. The designer and owner of the company was there and he said the shower trailer was his first design as his wife would only go out on the trail if she could have a shower. Others saw his simplistic yet rugged design and started to ask him to build trailers for them. There were also many brands and varieties of roof top tents. There was showcase area that looked like a small city of nothing but different roof top tents. Solar power systems were on display by numerous vendors. Just about every fridge/freezer brand offered in the U.S. was present. There were some good show special deals on fridge/freezers especially on Sunday as the vendor were packing up. Sunday in general is a good time to hit the vendors as many would rather sell their wares at a discount than pack them up to take home. Here is brand called SnoMaster that I had never seen before. Dometic was there with a wide array of models. If you want to have your FJ40 rebuilt into modern better than new condition there were a couple of companies present that would be glad to do it for you. As before at the Overland Expo, there was a whole separate area dedicated to adventure motorcycles. This is only about a third of what was there.

BMW, KTM, and Ural were all offering test rides. I couldn't pass up the opportunity to test drive a Ural 2 wheel drive side car setup. Driving a sidecar rig is a totally unique experience. I felt mostly out of control for the first 100 yards or so. With the sidecar on the right side, left turns felt incredibly stable while right turns felt incredibly unstable. The test ride was on pavement, gravel/dirt, and a two track power line maintenance road. It was very weird getting used to leaning left and turning right without falling over like you would on a 2 wheel motorcycle. Any time the side car was higher than the bike the steering seemed to have a mind of it's own. Despite feeling much more comfortable with the rig by the end of the ride I didn't attempt to "fly" the sidecar. I definitely still have a lot to learn about riding with a sidecar. These pictures just scratch the surface of what was there to see at the Overland Expo. They don't capture the feeling of being there and the many rows of vendors with gear on display. Just walking through the camping area is an adventure in itself with every imaginable type of overlanding vehicle present.
Last edited by NotAMog on Wed May 24, 2017 8:16 pm, edited 6 times in total.
Bruce Berger
KD6GCO
'72 Pinzgauer 710M 2.6i
'91 Honda ST1100 197,000miles and counting

Thanks for the info. Hopefully, between you and Paul, we can put enough information together for a net. Should be very interesting!!!

Those were some great pictures and reports!!!
DaveK
K6DTK 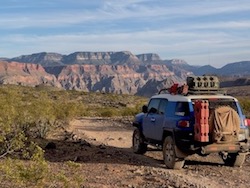 Thanks for the update. Looks like a lot of fun and worth a trip next year.
Phil

"National parks are the best idea we ever had. Absolutely American, absolutely democratic, they reflect us at our best rather than our worst"
Wallace Stegner
Top
Post Reply
3 posts • Page 1 of 1