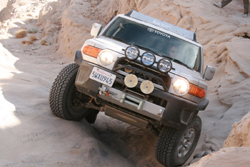 I had a great time out in Borrego. Very well organized event. Good job OAUSA for pulling off another fun BorregoFest. I only wish there was MORE food! Next fest, I vote for a Happy Hour with some kind of icebreaker activity before the potluck to help everyone meet.

The run I was on had an excellent trail boss, good job Steve.
Chris
Top

what a GREAT time! thanks to the powers that be for keeping borregofest alive and growing. it truly does keep getting better and better every year. of course, the trails and offroading were fun but the best part for me is seeing all my buddies and meeting new people. thats what its all about for me and always will be.

sorry if we (me, chris and eric) woke yas up friday night (or sat morning?) !!! we TRIED to keep quiet during our drunken stuper thru the desert. we all walked over to the bathrooms then on the way back we all layed on the road to stare up at the stars. that was fun. the world seemed to be spinning a little faster though and the pavement had no drunk handles installed.

Frogeye KI6LHP wrote: I only wish there was MORE food!

Yes, I agree. Next year every body needs to bring more food.

BorregoFest, now in it's 3rd year, and 1st under the OAUSA banner, is a spectacular event. And the 2008 BorregoFest, IMO, was the best yet. The weather was fantastic - sunny clear skies, 90's during the day, 50's and star-filled skies at night - we couldn't have asked for more beautiful days. The turnout was spectacular as well, with so many old friends and new faces that I was unable to spend time with everyone I'd have liked to. My apologies to those who I failed to meet, or trail runs I was unable to join.

I do think some special mention is due for some people who helped to make BorregoFest the success it was.

Gon2Srf, thank you for the amazing amount of time and energy you put into this event, and specifically the organization of the trail runs we all had the pleasure to enjoy. Your attention, to both the site and the 'Fest itself, made it desert festival we will all remember with a smile.

Olllie, you are the man. As you did at Adventure4X4, you have made sure BorregoFest continued to be an off-road weekend that is not to be missed. Your organization on the site, keeping threads going smoothly, the time put into the information packets for the trail leaders, communication plans for the runs, and even working as a trail leader - well, you have outdone yourself again.

DaveK, the mine tour was outstanding. Transversing muddy springs, climbing wire rope, and dodging an angry bat made for a terrific run chock-full of fascinating history. And a thank you to Chris (I think that was his name), the owner of the first mine who graciously allowed us to view his snapshot of the past, complete with a narrated tour of the entire mine site. This was an unexpected treat, and gave me a new appreciation for the people involved in a dynamic era of Southern California.

The Potluck on Saturday night was a meal unlike any the Anza Borrego desert has seen before. The abundance and variety of food was outstanding, and delicious, too. As a food-aholic, it was a dream come true; So to all who contributed to the unbelievable "Borrego Buffet", a heart-felt thank you.

I've left out many other folks who assisted the "staff" of OAUSA in making BorregoFest bigger and better than ever - so to all who aided and attended BorregoFest 2008, and made it a wonderful weekend for me:

Just got home. That was simply a great weekend and an amazing event. I have so many people to thank and so much to share but first I have to unload the rig.

Thanks to every one who came out and participated in this years BorregoFest and made it the best yet. I look forward to seeing your pictures and hearing your stories.

no pics yet but I'm already jealous of the reports. cmon pics!!

Oh yeah, what an awesome event!!! We got so many pics it'll take awhile to get through them all. A big thank you to Ollie, Scott and everyone else who had a hand in making this BorregoFest so great! I'll wait for Jesse (raYGun) and everyone else who ran with me on friday to post pics for that run. I had to ride shotgun with raYGun and leave my Jeep at camp for my brother to use to pick up a new clutch. It went out on him on our way up into Sheep Canyon thursday night. Good times.

john and autumn ....your pics are FUN. we took alot of people pics too and i'll try to get them loaded sometime today.
G-4!!!!
Trail Mom
Top

I want to thank everyone for such a great event. The outcome was better than expected and, for the most part, everything went quite well. I'm recovering from a major cold, as some of you noticed, and I'll get my pics and vids up by weeks end. My strength is low and I haven't been able to make it to work yet this week. Hopefully I'll feel better tomorrow.

It's not a cold Ollie, it's the post BorregoFest blues.